The basic principle of slope angle measurements, which applies to the use of protractors, clinometers and total stations.

There are several ways to calculate slope angle. Common measuring equipment such as clinometers and total stations both use a similar method of raising the geometry of the slope below.

By placing poles of equal heights at Points A and B, the line from the top of Pole A to Pole B is parallel to the actual slope. The line has the same angle as the slope below. 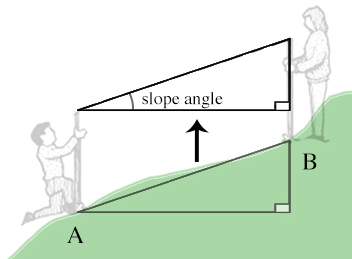 The “easiest” way (which is not the same as the most accurate way) to measure this angle would be to place a protractor on the top of Pole A, drag a string from the top of Pole A to Pole B and read the angle. Note: This method would only be accurate if your protractor is perfectly flat at 180°. 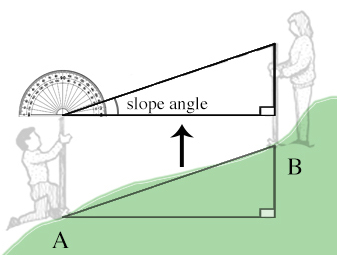 Clinometers are essentially protractors that are a little bit more sophisticated. Clinometers provide more accurate measurements because their design helps the surveyor correct for holding error (i.e. ensuring that the base of the “protractor” component is perfectly horizontal). 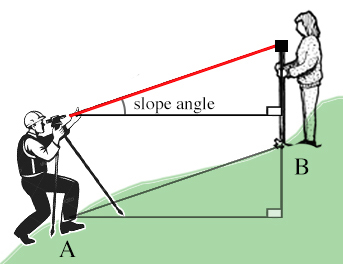 This is done through a press of a button, and the machine will record both the slope angle and the slope distance for you. Because total stations can measure long distances, the total station can remain at the same spot (i.e. Point A) while the total pole is moved to farther distances (Point C, D etc.) for more measurements.